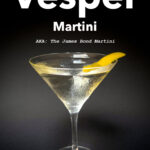 The Vesper Martini may or may not be a double agent. After all, this cocktail’s second name is the James Bond Martini. Either way, you don’t have to go undercover to craft the sophisticated sipper at home when you follow our special mission a/k/a the Vesper Martini recipe.

Cocktails and Hollywood have long been intertwined. The connection usually involves a character like The Dude drinking a cocktail like the White Russian in movies like The Big Lebowski.

But not all characters are created equally. Some characters like James Bond don’t just drink cocktails. They create them too.

What Is a Vesper Martini?

The Vesper Martini isn’t the only three-ingredient cocktail on the block. But it’s the only one we know of that was invented by an iconic author and popularized by his main character.

While we never met Ian Fleming (the author), we suspect that he wasn’t intending to create mixology magic when James Bond (his main character) introduced the world to the Vesper Martini. He also probably didn’t know that one of the cocktail’s three ingredients would have a shorter shelf life that his books.

Yes, Kina Lillet is no more. However, the Vesper Martini a/k/a the James Bond Martini lives on to fight the good fight one sip at a time. Today, however, bartenders craft Vespers with Lillet Blanc instead of Kina Lillet.

History of the Vesper Martini

Ian Fleming created history in his very first novel. Not only did he introduce the world to James Bond in Casino Royale, but he also introduced a new cocktail – the Vesper Martini.

The recipe for the Vesper Martini is no top secret affair. In fact, Fleming, who named the drink after original bond girl Vesper Lynd, spelled it out clearly as “Three measures of Gordon’s, one of vodka, half a measure of Kina Lillet. Shake it very well until it’s ice-cold, then add a large thin slice of lemon peel.”

Ironically, James Bond proceeded to drink many more cocktails in eleven more books but never another Vesper Martini. But that one book was enough to create a cocktail for the ages.

More than a half century later, every reputable bartender knows how to craft a Vesper Martini. They also know how to craft a James Bond Martini since it’s the same exact drink.

Although Ian Fleming was specific about the Vesper recipe when he wrote Casino Royale, we’ve taken a couple liberties with his recipe to craft a version that delights us with every sip. Our recipe includes the following ingredients:

Our recipe has two variations from the original Vesper cocktail recipe.

Second, we don’t specify Gordon’s gin. Instead, we say to use your favorite gin. It’s no top secret that this is the best approach for achieving cocktail success.

We recommend using your favorite dry gin when you craft a Vesper Martini at home. We chose to use Citadelle dry gin from France to craft ours. Produced in Cognac, the premium gin features 19 botanicals and has an ABV of 44%.

We also recommend using your favorite vodka. We used Absolut Vodka since that’s our current vodka of choice. Distilled in Sweden, this vodka also has a 40% ABV.

Not your typical liquor, Lillet Blanc is actually an aromatized white wine. Aged in Bordeaux and blended with fruit liqueurs (mostly citrus), it has a 17% ABV.

Buy a bottles of gin, vodka and/or Lillet Blanc from Drizly or Total Wine if you live in the US.

How to Craft a Vesper Martini

You don’t need any special bartender or spy tools to craft a Vesper Martini at home. Instead, you just need the following basis bar tools:

Measure the gin, vodka and Lillet Blanc in a 3:1:0.5 ratio. Our recipe calls for three ounces of gin, one ounce of vodka and a half ounce of Lillet Blanc.

We use a Japanese jigger to get accurate measurements and easy pours for all three of these liquids.

Purchase a Japanese Jigger if you don’t have a jigger or want an inexpensive upgrade.

The next step is where you have a decision to make. Namely, you need to decide if you want your drink shaken or stirred.

Either way, you’ll want to add a handful of ice cubes to a shaker or mixing glass before you shake or mix your way to cocktail bliss.

After you shake or mix the three liquids until they’re chilled and combined, strain them into a martini glass.

Finally, garnish the Vesper Martini with a swath of lemon peel.

Why is the Vesper Martini called a James Bond Martini?

Who invented the Vesper Martini?

Ian Fleming invented the Vesper Martini and shared it with the world in Casino Royale, his first James Bond novel.

What are the ingredients in a Vesper Martini?

What’s the best gin to use in a Vesper Martini?

While you should use your favorite vodka in this cocktail recipe, Gordon’s was James Bond’s go-to gin for this cocktail.

Is the Vesper Martini shaken or stirred?

The Vesper Martini was originally shaken, not stirred. However, some mixologists prefer to stir this particular martini.

What type of glass is best for the Vesper Martini?

Not surprisingly based on its name, the Vesper Martini should be served in a martini glass.