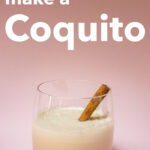 Our Coquito recipe will show you how to create the Puerto Rican cocktail at home. It’s a tasty cocktail with a boozy, coconut kick. It’s also a great option for people who don’t want to add raw eggs to their creamy Christmas cocktails.

Is it just us or is the Coquito having a moment? The Puerto Rican holiday tipple seems to be everywhere both online and in real life.

The traditional Caribbean cocktail initially hit our radar while we were researching holiday drinks. Then, by pure coincidence, we bumped into a TV commercial (sponsored by Goya) featuring the milky concoction along with dancing gingerbread man cookies.

We were so entranced that we had to rewind the DVR both for the dancing gingerbread men and the drink. Before long, we went to the store to buy coconut cream and ordered a brand new blender online.

Coquito translates to little coconut, so it’s no surprise that the Coquito cocktail recipe includes coconut cream. Other key ingredients are sweetened condensed milk, cinnamon and a whole lot of rum. It sort of looks like an Eggnog but it’s an oversimplification to call the Coquito a Puerto Rican Eggnog.

Yes, both creamy cocktails are popular during the Christmas holiday season but that’s where the similarities end.

For starters, you don’t need to add eggs to craft Coquito. This drink derives its creaminess from processed milk products and coconut fat. Additionally, the Coquito answers Eggnog’s nutmeg with cinnamon and a distinct coconut finish.

While you don’t need eggs, you do need to use a blender, as we do in our recipe, unless you’d rather use a stovetop. That’s the recipe that calls for eggs.

Speaking of recipes, there are as many Coquito recipes as there are stars in the sky. And, if you’re not careful, drinking too many cups of Coquito may cause you to have stars in your eyes.

History of the Coquito

While the Coquito’s roots are firmly rooted in Puerto Rico, its exact origin is a mystery. However, it’s no mystery that the creamy rum cocktail has become a global holiday darling.

In a way, each Puerto Rican family created their own Coquito histories when they developed recipes that fit their personalities and budgets. Passed through generations, some of those recipes add eggs to the mix and others replace cinnamon with nutmeg and cloves.

Since we didn’t grow up in a Puerto Rican family, we don’t have the luxury of a secret family recipe and that’s okay. We were able to create a recipe that works for us based on where we live, the ingredients we can source and our personal flavor preferences.

We mentioned that every Coquito recipe is different and we weren’t kidding. When you follow our easy Coquito recipe, you need to source the following ingredients:

Some Coquito recipes include eggs which adds a certain richness to the creamy drink. Although we were tempted to include eggs in our recipe, we ultimately decided to take an egg-free route.

One thing our Coquito recipe doesn’t scrimp on is rum. What can we say except that we like to drink boozy cocktails? It’s how we roll except when we’re drinking coffee or lemonade.

Buy bottles of rum from Drizly or Total Wine if you live in the US.

How to Craft Coquito

You don’t need any special bar tools to craft Coquito at home. You just need a blender, a measuring spoon and a measuring cup.

You also need a bottle or jar for chilling your Coquito in the refrigerator.

The first step is to dump the cans of coconut cream, evaporated milk and sweetened condensed milk into the blender.

Pro Tip
Use a rubber spatula to get all of the condensed milk out of the can. It’s too good to waste.

Measure and add the rum.

Immediately measure and add the vanilla extract and ground cinnamon to the mix.

Blend the ingredients until they’re pureed. This should just take a couple minutes. We use the latest series Vitamix blender but any full-sized blender should work in this recipe.

Next, pour the Coquito mixture into a bottle or jar.

Give it a good stir or shake and then refrigerate the mixture for at least two hours until the Coquito is fully chilled.

Give the mixture another good stir or shake when you remove it from the refrigerator. You may need to skim the top layer or run it through the blender a second time if it’s too thick to pour.

Pour into small glasses and garnish each glass with a cinnamon stick.

Feel free to sprinkle some ground cinnamon or nutmeg on top as well. We don’t do this but it’s a valid option.

The options are practically endless when it comes to Coquito variations. Here are some ideas to get you started on your quest to create your personal best Coquito recipe:

Coquito is a creamy Puerto Rican cocktail typically imbibed during the holiday season.

Where is Coquito from?

The Coquito’s roots are in Puerto Rico.

What are the ingredients in Coquito?

Is Coquito shaken or stirred?

Neither. The Coquito is blended.

Can you freeze Coquito?

While you could technically freeze Coquito, the better option is to refrigerate the boozy rum beverage.

How long does Coquito last?

Our Coquito version should last two weeks in the refrigerator if you firmly seal the container.