This article contains affiliate links. We may receive compensation if you make a purchase at no additional cost to you. 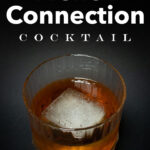 The French Connection cocktail has a fun name and is super easy to craft at home. However, don’t underestimate this two-ingredient cocktail that tastes greater than the sum of its two parts. It’s a cocktail keeper.

The French Connection intrigued us before we took our first sips…

For starters, its name reminds us of France. After multiple visits to cities like Paris, Lyon, Dijon and Strasbourg as well as Marseille, we feel a connection to the hexagonal nation.

And, since we met at an Oscars party, we also have an affinity for movies that have won Academy awards. You guess it – this cocktail was named after The French Connection movie.

What Is a French Connection Cocktail?

A French Connect cocktail is a two-ingredient cocktail crafted with equal parts of Amaretto and Cognac.

It’s also a sweet, potent and easy drink to sip after dinner, preferably next to a fireplace and with a special someone.

History of the French Connection Cocktail

While somebody somewhere invented the French Connection cocktail, we don’t know who to thank or where that happened. But we do know a couple key things…

We know that the two-ingredient cocktail first showed up in bars in the ‘me decade’ of the 1970s. This is the same decade that The French Connection debuted in movie theaters.

We also know that The French Connection won five Oscars including Best Picture, Best Director, Best Actor, Best Adapted Screenplay and Best Film Editing. The movie told the story of Popeye Doyle and Cloudy Russo, as portrayed by Gene Hackman and Roy Scheider, and included one of Hollywood’s greatest chase scenes ever.

Our French Connection cocktail only has the following ingredients:

Yes, the French connection is a 2-ingredient cocktail not counting the ice. There are no mixers. There are no garnishes. You just need two liquors and, if you’re like us, you already have them in your home bar.

Based in Italy’s Lombardy region, Disarrono is the world’s most prolific amaretto producer. Its almond flavored liqueur has a 28% ABV but, ironically, doesn’t contain any almonds. Instead, Disarrono uses apricot kernels to achieve its nutty sweet flavor.

Distilled in Cognac, Courvoisier V.S. cognac has a 40% ABV. This twice-distilled, barrel-aged brandy is great for sipping by itself or on the rocks. It’s a relatively affordable cognac choice that helps fuel this and other cocktails.

Buy a bottles of amaretto and/or cognac from Drizly or Total Wine if you live in the US.

How to Craft a French Connection Cocktail

The first step is to place a large ice ice cube into a lowball glass.

You can use small ice cubes; however, a large cube is the better way to go. Not only do large ice cubes displace more liquid which chills cocktails faster, they also melt more slowly. Additionally, large ice cubes are très soigné.

Buy a large silicone ice cube tray from Amazon if you don’t already have one.

Next, measure the amaretto and cognac in a 1:1 ratio. Pour the two liquors directly into the lowball glass as you measure each. We use a Japanese jigger to get accurate measurements and easy pours for both of these liquids.

Purchase a Japanese Jigger if you don’t have a jigger or want an inexpensive upgrade.

The final step is to gently stir the cocktail. That’s it. This cocktail doesn’t require any garnishes or hoopla.

You could hypothetically add orange peel or a maraschino cherry but don’t do it. We prefer the French Connection without any accoutrements. We suspect that you will too.

Consider the following options if the French Connection inspires your creative juices:

What are the ingredients in a French Connection Cocktail?

What’s the best cognac to use in a French Connection Cocktail?

You should use your favorite cognac in this cocktail recipe. We typically use Courvoisier VS Cognac but any cognac will work just fine.

Is the French Connection Cocktail shaken or stirred?

The French Connection Cocktail is stirred, not shaken.

What type of glass is best for the French Connection Cocktail?

We like to serve this cocktail in a lowball glass and you should do the same.